When I first heard the term, “The Dark Triad,” my mind conjured up a B movie scene where a malevolent group gathered at midnight to sacrifice a virgin under a full moon chanting something ominous. Little did I know, after I researched the phrase, that the “group” in my mind would be gathered in one person and the B movie chant was, “build-the-wall, Build-the Wall, BUILD-THE WALL!” 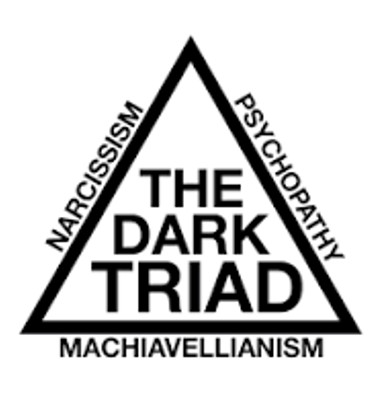 Since “The Donald” foisted upon us his ratings-grabbing, campaign-announcing escalator scene (where he paid people to be in the audience!), anger and rage have skyrocketed in America. Crimes of hate were going down until he took that escalator ride. His “Campaign Announcement” speech was dark and violent, calling Mexicans murders and rapists, and his “Inaugural” speech was so dark that it is known as the “American Carnage” speech.

In my view, Donald Trump is a triple threat of darkness known to psychologists as “The Dark Triad” personality.

Psychologists who are experienced with The Dark Triad personality, are quick to say that there are many subtleties and degrees in the many traits presented, but there is nothing subtle in Donald Trump. We see his Dark Triad personality visibly every day, like a B Movie aberration, with his cruel, vindictive hostage-taking government shutdown and the repulsive atrocities happening at our Southern border such as using immigrant children as “bait” to catch sponsors.

What is The Dark Triad? It is the combination of three distinct and malformed personalities types: narcissism, psychopathy, and Machiavellianism. Just one of these personality types can damage just about anything with which they come in contact … relationships, families, workplaces, organizations. Where ever they go so goes destruction and disruption. It is imperative for us and our country to learn about these personality types and the devastating, rare combination of all three so that we develop a filter through which to read a tweet and hear a speech.

One resource I read said that if you are concerned about a colleague who may exemplify these personalities, you should discuss your concerns with your Human Resources department. What can be done if your fear is that The Dark Triad personality you’re concerned about is the President of the United States?

Americans now have had plenty of time to observe their President’s behaviors. Actions speak louder than words, but in “The Donald’s” case, words speak loudly too. To quote Maya Angelou, “When someone tells you who they are … believe them.”

Our President’s actions are so unbelievable that they are difficult to believe. To believe that he actually means what he says and that he is really doing what he does is nearly incomprehensible. Yet, “believe” we must. We must believe and understand the actions of a Dark Triad person or else how might we correct the damage, to heal the deep wounds perpetrated on our country and society?

When George W. Bush was president, I facilitated an international meeting on Information Literacy in Egypt. A colleague and I took a long taxi cab ride to an airport, and we had a chance to get to know our cab diver a little. After a while, he gently started to talk about President Bush. He was vague, not knowing how we would respond. We quickly understood, and my colleague blurted out, “We didn’t vote for him!” Our taxi driver then felt more comfortable to make a few observations about our president, and I will never forget one comment, “Bush. Not a normal man.”

I often think of that astute Egyptian taxi driver and wonder what he thinks of our America president now?

What are “The Dark Triad” character traits?

Below are brief summarizations of the three, distinct personality traits of narcissism, psychopathy, and Machiavellianism. All three are rarely present in one person. Included are, in my view, a few examples of Donald Trump’s Dark Triad behavior characteristics (I’m sure you will think of more, and many are so obvious no example is necessary) to support my thesis that our president, our Commander-in-Chief is dark-times-three and the exponential results are as frightening to me as early Germany was to the 20th Century:

Narcissists have enormous egos. When in their presence, you’ll wonder how on earth they can say “I” and “me” so often and how they cannot be embarrassed by it. Common narcissistic traits are:

Psychopaths observe emotions but have an inability to feel them; instead, they learn how to mimic feelings, so they appear normal. They can be so expert at manipulating others and copying emotions that they may even seem normal to their closest relatives and friends. One core and vital aspect of psychopathic individuals, are their lack of moral restraint, as morals are irrelevant, the whole idea unfathomable to them. Psychopaths can be very charming. They may gain our trust, yet they are incapable of forming actual emotional attachments. The seek the limelight!

Dr. Robert Hare, who authored Without Conscience: The Disturbing World of the Psychopaths Among Us and co-authored Corporate Psychopathy, related a study that demonstrated that the percentage of psychopathology in corporate professionals is four to five times greater than in the general population, and these rank very high on the twenty-point Hare Psychopathy Checklist. Common psychopath traits, edited from the checklist, are:

Dr. Hare describes people he calls psychopaths as “intraspecies predators who use charm, manipulations, intimidation, sex, and violence to control others and to satisfy their own selfish needs. Lacking in Conscience and empathy, they take what they want and do as they please, violating social norms and expectations without guilt or remorse.”

Niccolo Machiavelli was banished from political life in 1512 and, subsequently, began writing which led to his famous work, The Prince. In The Prince, he advocated that rulers be unscrupulous and resort to deceit, cunning, political assassination, and use of fear to keep order and stay in power. The message contained in The Prince was interpreted to endorse the dark arts.

Those who possess Machiavellian traits (Machs) place a high priority on power, money, and competition (winning at all costs). Machs detach themselves from conventional morality and have no qualms about deceiving and manipulating others. There are three clinical subscales: 1) the use of deceit in interpersonal relationships, 2) a cynical view of human nature, and 3) the lack of morality. Common traits gleaned from my research are:

As Nancy MacLean, an American historian and Duke University professor, wrote in the last paragraph of her stunning book, Democracy In Chains, “Is this the country we want to live in and bequeath to our children and future generations? … If we delay much longer, those who are imposing their stark utopia will choose for us.”

What worries me more than a Dark Triad? Those who blindly follow them.

Jill Cody is a citizen advocate and award-winning author, Jill’s 31-year career in public service, was infused with a life-long passion for knowledge and a will to inspire change in politics, the environment, higher education, and organizational development. She is the author of the two-time award-winning book, America Abandoned -The Secret Velvet Coup That Cost Us Our Democracy, and will soon be host of “Be Bold America!” on KSQD 90.7FM radio.